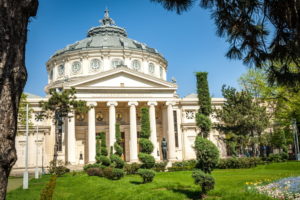 This is Bucharest’s most prestigious concert hall and one of the most beautiful buildings in the city. It was built in 1888 in neo-classical style after a design by the French architect Albert Galleron. The project was conceived by the diplomat Constantin Exarcu and the money for the completion of the building were gathered in a public collection in which people were asked to “give a leu for the Atheneum” (The “leu” being the currency of Romania). With its 40 m high dome and the Doric columns it resembles an ancient temple. The beautiful facade is adorned with mosaics of five Romanian rulers. On the inside there are scenes from Romanian history. This is the place to hear classical music in Bucharest. The resident orchestra is George Enescu Philarmonic. Address: Piata Revolutiei (Revolutiei Square). 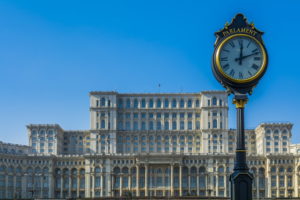 Because I grew up in Bucharest I absolutely hate this big ugly Soviet-style building which represents the peak of Ceausescu’s megalomania. Even though I was young at the time I remember a little about how this part of the city used to look before they tore it down for the civic center. Many old beautiful buildings were demolished to make way for this monstrosity. I remember a joke that was going around at the time: the boulevard that ends with the Parliament Palace (which used to be called The House of the People) was to be called “The Victory of Socialism” and the joke was that in fact its name is “The Victory of Socialism against Bucharest”. But I know that this building is a big tourist attraction in Bucharest (the second largest building in the world in terms of surface, competing with the Pentagon in size). That’s why I decided to include it in this guide. I visited the building once, when they opened it for public in 1990 and the rooms are the biggest I’ve seen in my life. The building is now used as the parliament house as well as for conferences and exhibitions and can be visited by guided tours. 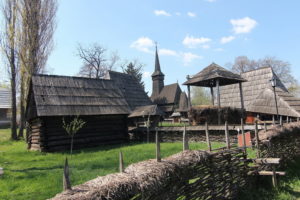 The Museum of Romanian Peasant is the winner of the European Museum of the Year Award for year 1996. A short visit to the museum will convince you that the award is well deserved. The collection includes 18000 pieces of pottery and 20000 examples of national dress from all over the country, as well as carpets, icons, furniture, photographs and films documenting the customs of rural life. But what makes it special is the way the collection is arranged; the museum looks more like an art gallery than a museum. The display information is hand written on pieces of paper or illustrated by freehand sketches. In one of the galleries you can see a wooden church and in another a wooden peasant house. They also have some beautiful “troite” (crosses placed at crossroads or at the edge of a village).

The museum building has an interesting story as well. The museum was founded in 1905 under the name of Ethnographical and National Art Museum. In 1906 Carol I laid the foundation for the present building; the construction was stopped in 1916 and restarted in 1932. It was completed only in 1935, 29 years after it was started. The red-brick building is an illustration of the neo-Romanian style ispired from the traditional architecture. In 1953, the communists “liberated” the building and sent the collection away to another location. The building was turned into a museum dedicated to the history of the Communist Party. In 1990 the museum returned to its old location. 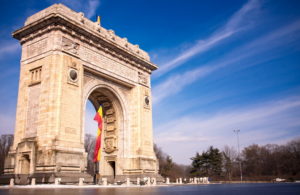 In northern Bucharest, along Sos. Kiseleff lies Bucharest’s Triumphal Arch (Arcul de Triumf). Modelled on the triumphal arch in Paris, the structure was erected in 1935-1936 to commemorate the creation of Greater Romania which took place in 1918. It sits on the spot where two earlier arches stood: the first arch made of wood and cardboard was erected in 1878 to mark Romania’s independence from the Turks; the second arch made of timber was erected in 1922 to mark Ferdinand’s entry into Bucharest as the first king of Greater Romania. The current arch is built of concrete and granite. Portraits of King Ferdinand and Queen Marie decorate one face, while the names of battles fought by Romanians during the First World War can be seen on the other face. The portraits of the king and queen were destroyed during the communist rule but they were restored in 1992. The sculptures decorating the arch were created by leading artists of the day, including Ion Jalea, D. Onofrei and Constantin Baraschi.

In the very center of Bucharest there is a place where one can take a break from Bucharest for a few hours. Cismigiu is located close to Universitatii Square, across the City Hall building. It is Bucharest’s oldest park and a great place to stroll and enjoy the peace that one can feel finding such a place in the middle of a hectic city. Among the lawns and trees and the winding paths you’ll find a lake with rowboat rentals, a beer garden, a playground for children, a chess area where old people play tournaments and plenty of park benches for relaxing and people watching. Sometimes there are Sunday concerts at the gazebo. Cismigiu was first designed and laid out in 1830 by the German landscape architect Carl Meyer, on the commision of Prince Gheorghe Bibescu, but it wasn’t completed until 1860. More than 30,000 trees and plants were brought in from the Romanian mountains to be planted on the 17 hectares park. Address: Blvd Regina Elisabeta.